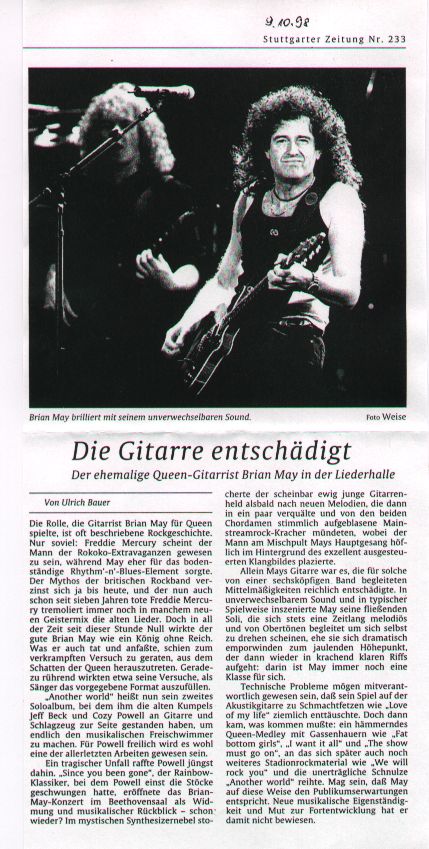 At 7:10am we made our way to Stuttgart. We arrived in Stuttgart at 11am and it took us again one hour to find our hotel, which was rather small and quite expensive.
On this day I was going to see Brian´s soundcheck and meet him backstage afterwards.
Anyway, it was raining the whole time. That´s why the promoter allowed us to get already in the "Liederhalle", the concert arena, early, shortly before 3pm. It was a very nice venue, but built for classic concerts, so there were seats only!
It was very interesting for us to watch how the crew worked to set up everything for tonight´s show.
And as we talked with the German promoter in his office we had already a look backstage, how everything looked:  Absolutely everything was so interesting, the doors of the wardrobe, the backside of the stage and everything else.
The soundcheck started at 5:50pm and lasted until 6:45pm. Neil came on the stage first, later the other band-members arrived and suddenly there was Brian on stage.
Julie arrived and asked us if we would like to have some drinks and after a little while she brought us some cokes.
Brian played "Driven by you" in the fast version, which was quite a surprise and I enjoyed it a lot. Then there came a guitar and drum part, the beginning of "Driven by you" (acoustic version) going into the fast version. "Business" and "The Show Must Go On" followed.
Afterwards Brian went to Trip, the sound engineer, and on his way to him he noticed me and said "Ah, I know you, always the same spot in the front row" and smiled.
At around 7pm Julie came and asked us to follow her to Brian´s wardrobe, but first of all we had to pass the backside of the stage again, all the offices, and so on.......and then I saw Brian sitting in a black leather chair. He asked us to come in, and although I had already met him earlier it was again an unbelievable moment, because for the very first time I met Brian in a private atmosphere. I was sitting right next to him in another leather chair. Brian was wearing blue jeans, a white shirt and of course white clogs.
I had such a great time there, presented Julie and Brian some presents, and both were happy about it.
Brian, I hope you liked the beer! 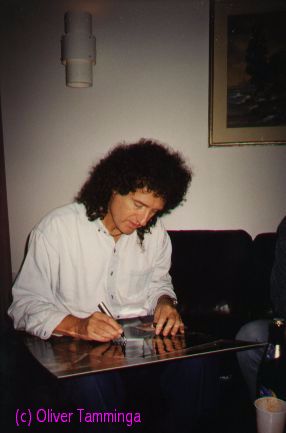 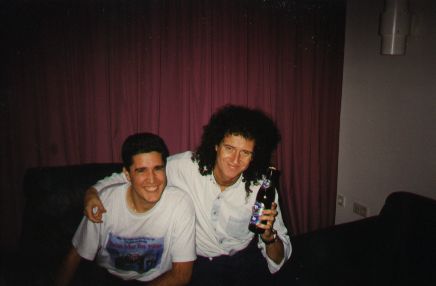 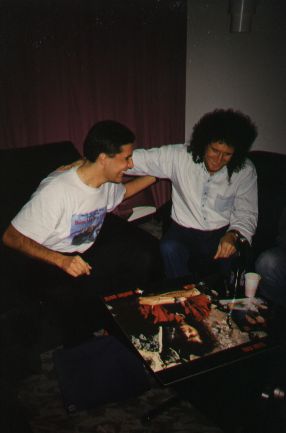 these photos show Brian and me backstage

I told Brian that I was going to see him many times on tour, and that so far I liked the concert in Hamburg most. He agreed and said that it was a good show. I showed him my May-keteers tour T-shirt and explained him that we were a gang of crazy fans from all over the world following him. He said we´re mad and I answered "It´s worth it, Brian." Brian then said, "It´s not always easy, Oliver.", and told me that he still had some voice problems, and I said that I recognized it from the shows in Scandinavia onwards.
He mentioned that he can realize now how awful Freddie must have felt singing with problems,and that he admired him because of his strength.
He also told me that he would change the set-list for tonight´s show because there was seating only and he didn´t like it that much, because he was fearing a lack of a good atmosphere. He wanted to play "Too much love will kill you" and "Driven by you" (fast version).
I asked Brian if he couldn´t play the guitar solo of "Innuendo" during the acoustic-set, but he told me that that he intended to play 2 acoustic songs tonight and that this part was difficult to play.
Brian was so nice to sign two wonderful items for me, with wonderful and very unique dedications! Brian is really so kind!!
Then we had to say good-bye. It was about 7:25pm and Julie said "Oliver, make a good atmosphere and let the other fans also start." Julie was really nice. I told Brian that I hoped to see him soon again, and he said "Oh yes, definitely."
The admission for the audience was at 7:30pm and, because of the many seats, only very few people could stand. The rest had to sit.
We were of course, as always, on our usual front row spots. 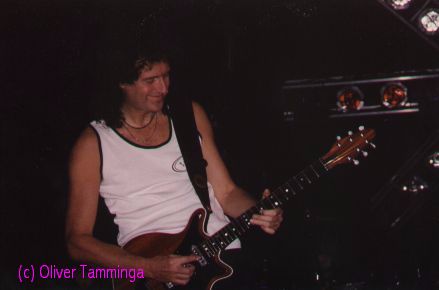 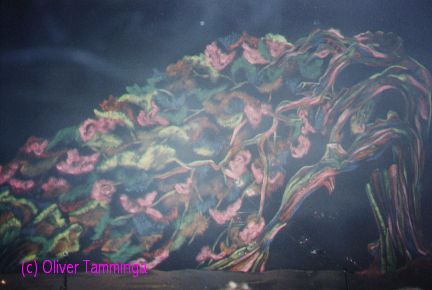 Unfortuantely, the atmosphere of the concert was really not good, and very few fans just took part and there was an annoying "Freddie Mercury" double who tried to make action and always imitated Freddie while Brian was on stage, which also led to the final result that other fans were so annoyed by him that they didn´t want him to take part in the show.
The usual Spike Edney solo was different this time, because during his solo Brian played on the guitar, and I liked this variation much more than the plain keyboard solo. The set-list was really, also in it´s order, very different to all the other concerts, and he played for the 1st time after many years the fast version of "Driven by you" again, which was the highlight of the show in my opinion.

And, in Stuttgart was the very first time that someone of the crew put water on Eric´s drums during "All the way from Memphis" and as he was drumming it looked great (quite similar to Roger in the "I want it all"-video).
Another premiere: Someone of the audience was allowed to sing a verse of "The Show Must Go On" into Brian´s microphone.
...and later on Brian sang the wonderful "No-one but you" again!
Unfortunately Brian skipped "Too much love will kill you", which was on the set-list.

After the concert, it was still raining, we were driving to Brian´s hotel, where we arrived at the hotel at 0:30am.
On our way to the hotel-bar Spike Edney crossed our way. We sat down at the bar, as we suddenly realized that Brian and Julie were sitting there in a corner. It was unbelievable.
Personally, I have had already enough wonderful memories during that day. That´s why I didn´t want to disturb Brian and Julie, but to fulfill Erin´s biggest wish, I went with her to Brian and excused for disturbing him, introduced Erin to him and got back again to my seat at the bar, not watching them because I really didn´t want to disturb. It was Erin´s time now and she was so happy. After a while, she came back to me and asked me to take a photo.
I went with her and took the picture, said "Bye, Brian",  and directly wanted to go to my seat at the bar again, as Brian told me "Good man. See you soon, tomorrow. Front row, as usual" and smiled.
After a while, the other band-members arrived and sat down next to Brian and Julie. Jamie even came to the bar, close to us, to order some drinks.
It was an unbelievable experience. I would have wished to have a short chat with the band  about the impressions on tour from both sides-as musicians and as a fan, but of course I didn´t want to disturb the round and after some drinks we returned happily to our hotel.
We arrived there at about 2am, and Erin told me what she had spoken with Brian about.
Brian asked her if I was a friend of hers, and as she agreed, Brian said something like "He´s got quite a collection." The next comment by Brian about me left me absolutely speechless.......
Finally, at about 2.30am maybe we went to bed, totally happy and overjoyed.


read chapter 7 (Munich) or go back to the concertography page